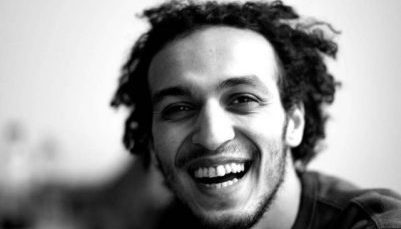 The Cairo summer sun was just beginning to shine on Rabaa al-Adawiya Square in 2013 when BuzzFeed Correspondent Mike Giglio saw tanks roll up to the protesters’ encampment and soldiers begin firing tear gas into the crowd.

As the protesters tried to dodge the streams of gas flooding their maze-like campground, stones and bullets also flew through the air. Patches of blood stained the ground.

“People in gas masks [stood] in the black clouds, shooting on both sides,” Hamada Elrasam, who was covering the event for the Egyptian newspaper Al-Masry Al-Youm at the time told Capital News Service recently. “I tried at the moment to leave, but whenever I went to every exit, I found people with shots in their head and all over their body.”

A friend of Elrasam’s–photojournalist Mahmoud Abu Zeid–was covering the Aug. 14 event as well.

The Young Man Known as “Shawkan”

Zeid–who goes by his nickname “Shawkan”–was arrested in the afternoon along with hundreds of others on the scene.

He has been in prison ever since. More than three years later, his mental and physical health has deteriorated. He vomits and has frequent fainting fits, said his long-time friend, Ahmed Abu Seif, in his interview with CNS. A pre-existing Hepatitis C condition also is worsening, he said

“Sometimes we think he may commit suicide!!” Abu Seif wrote in an email to CNS from Egypt. “All the time he says he wants to be free because he is going into pieces!”

Shawkan is part of a case that includes 739 other defendants, all eligible to receive capital punishment.

Only last year did prosecutors charge him with weapons possession, illegal assembly, murder, and attempted murder. The trial has been pushed back five or six times.

The Committee to Protect Journalists–a non-profit advocacy group that monitors the arrest and detention of journalists found that 25 Egyptian journalists had been imprisoned in 2016, compared to five in 2013.

Egyptian embassy officials in Washington DC declined to comment on Shawkan’s case. But government officials have previously described those who were arrested that day as belonging to the Muslim Brotherhood, an organisation Egypt considers to be a terrorist group.

Daniel C. Kurtzer, former United States Ambassador to Egypt, said that when he was posted in Egypt for nearly four years until mid-2001, discussing the media freedom with then-president Hosni Mubarak was difficult, and suspects such conversations with current president Abdel Fattah el-Sisi would be even harder.

“Mubarak defined much of what we were describing as human rights issues in terms of internal security, so it was a much more difficult dialogue,” Kurtzer said. “And of questions of basic freedoms like freedom of the press and of association, again, these were very often defined as internal security issues, which would prompt him to be very cautious.”

As part of the 2011 Arab Spring, citizens protested against Mubarak’s regime, calling for an end to police brutality, lack of free elections, restricted speech corruption, unemployment and low wages. Mubarak was eventually forced from office.

In 2012, the first free elections were held and Mohamed Morsi, a member of the Muslim Brotherhood, was elected president. However, on July 3, 2013, Morsi was removed from office in a military coup led by Sisi, who then assumed office.

The Muslim Brotherhood is now banned as a terrorist organization. Morsi is in prison as are many of his supporters, including an increasing number of reporters who authorities link, often erroneously say critics, to the group.

“Journalists in Egypt have never faced the threat of arrest, assault, and censorship to the level that they do today,” said Yasmin el-Rifae, the Middle East and North Africa research associate at CPJ. “This is part of a wider crackdown by the government and security forces which has imprisoned thousands of people, some of them activists, journalists, and political dissidents of all backgrounds.”

Egypt is a strategic ally of the United States, according to a State Department official who was not allowed by department rules to be quoted by name. Unlike most other Middle East countries, it has diplomatic relations with Israel and is fighting a growing terrorist threat from ISIS, particularly in the Sinai Peninsula.

When Shawkan Fell in Love

Shawkan was born in Kuwait. He left his home in 2009 to attend the Akhbar El Yom Academy in Cairo where he studied journalism, according to Elrasam. After graduation, he took up photojournalism.

In the years after graduating, Shawkan freelanced for TIME Magazine, Die Zeit, BILD and Demotix., according to Elrasam. He was freelancing for Demotix at the time of his arrest..

“Shawkan’s photos are energetic and unique, and capture a very dynamic time in Egypt’s history,” said el-Rifae who helped put together a recent exhibit of his work in the Bronx.

The Morning that Changed Everything

Shawkan arrived at Rabaa al-Adawiya Square with French photographer Louis Jammes at 5 a.m. They worked for several hours until the violence began.

At first, Shawkan took photos from outside of the protesters’ barricade, on the side of the police, because that is where he had access, said Giglio, who was with him and also arrested that day.

Shawkan, in a letter he wrote from prison published on CPJ’s website, said he was arrested after identifying himself to the police as a journalist.

After their arrests, Shawkan and Giglio were taken to Cairo Stadium for processing. Giglio was released, probably because he is a western journalist, he said When he last saw Shawkan, he was kneeling on the ground with his head down.

Shawkan is now being held in Cairo’s Tora Prison, which includes a section known as “Scorpion” where prisoners are isolated, allegedly tortured and denied access to food and medicine, according to Human Rights Watch.

“It was designed so that those who go in don’t come out again unless dead,” Major General Ibrahim Abd al-Ghaffar, a former Scorpion warden, said during a television interview in 2012.

In 2014, HRW found that “scores of Egyptians” died in custody, many after experiencing life-threatening conditions in police stations or after being denied access to medical care.

“We live in tombs,” one prisoner is quoted as saying in an 80-page HRW report about Tora Prison’s maximum-security section.

According to an email response from Amr Magdi, a HRW researcher on the Middle East and North Africa, prison wardens can overrule medical personnel, slowing down and preventing care altogether.

Shawkan is in a less harsh section of the prison called the “Investigations” unit. Family members are allowed to visit prisoners there. The photojournalist’s older brother, Mohamed Abou Zeid, said he visits him once a week, bringing food and sometimes medical supplies.

“I am living in a tiny cell under harsh conditions that an animal wouldn’t bear,” wrote Shawkan from prison in 2015.

“I share a cell with twelve political prisoners,” Shawkan wrote in a different 2015 letter from prison. “We live in a small cell just 3 meters x 4 meters, which is not even suitable to be a cage for animals. We have NO access to sun or fresh air for days or weeks at a time.”

According to an email response from Elrasam, Shawkan’s family believes the prison’s conditions are “bad” and that him being there is an “injustice.” He is also sad and tired, his brother said.