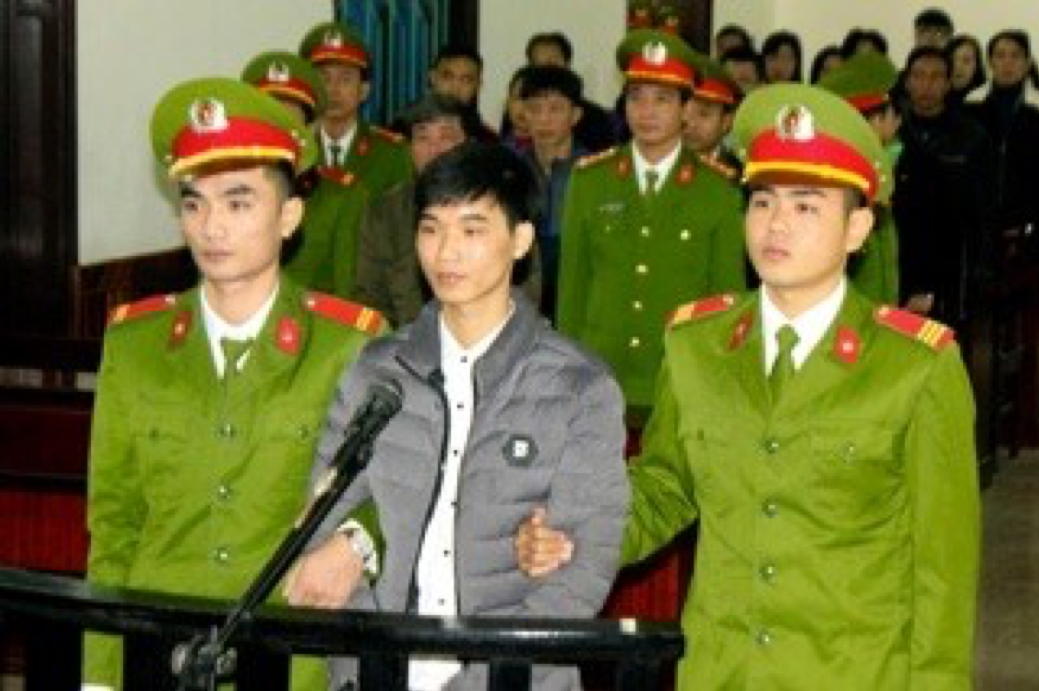 Asia Hester is a senior Multiplatform Journalism major and French Studies minor at the University of Maryland. She's interested in documentary photography and film with hopes of becoming a traveling filmmaker. @helloitsasia1

At 7:59 a.m. the next morning, his editor, Chan Nhu Hoang responded: “Call me back ASAP.” But the 22-year-old videographer was never heard from again.

That same day, Hoa’s family reported him missing in the central coastal province of Ha Tinh. Two weeks passed before police informed the family that Hoa had been arrested for “abusing democratic freedoms.”

Hoa had known he was under police surveillance, his editor told Capital News Service in an interview. He had been covering environmental protests following an unprecedented toxic spill and massive fish kill in April 2016 caused by the Taiwanese-owned Formosa Plastics Group.

The spill had killed millions of fish and displaced workers in villages along the coast. Authorities had blocked reporters from covering the daily peaceful protests. Hoa had been the first to use a camera-mounted drone to get around the reporting ban. His reports ran on Radio Free Asia.

For weeks, his editor had been communicating with Hoa by text. He had started to miss his deadlines, the editor said. “Sometimes he would report to me, ‘I’m on (the) run now, I have to go (into) hiding,’” Chan Nhu told CNS.

“Hoa would say, ‘This week I can’t turn in any video or work this week because I’m hiding,’” he said. “’They are trying to catch me.’”

After 10 months in detention, on Nov. 27, the People’s Court of Ha Tinh Province found Hoa guilty of inciting social unrest and promoting anti-state propaganda. He was sentenced to seven years in prison with a subsequent three years of house arrest for “sharing and disseminating articles, videos, images with negative content, inciting, distorting the truth,” according to the court.

The Embassy of Vietnam declined requests for comment on the case.

The single-party Communist government controls more than half of the media outlets in the country, carefully monitors civil dissent and aggressively punishes offenders, according to experts.

An estimated 22 journalists and citizen journalists have been imprisoned in Vietnam since 2010, according to Reporters Without Borders, a media advocacy group.

In 2016, Human Rights Watch documented 36 cases of physical attacks on activists beaten for their work. After prominent human rights lawyer Nguyen Van Dai and his colleagues gave a talk about citizen rights under the Vietnam Constitution, they were followed and attacked by a group of men in disguises.

The government retaliates against online activism as well.

“Authorities continued to suppress online political expression through politically motivated arrests and convictions of bloggers as well as through short-term detentions, surveillance, intimidation, and illegal confiscations of computers and cell phones of activists and family members,” according to the State Department’s Bureau of Democracy, Human Rights and Labor.

The spill was Vietnam’s largest and most lethal environmental disaster, requiring the help of the international scientific community to determine the type of toxins involved.

The Formosa Ha Tinh Steel Plant, which had been built on 8,000 acres, illegally dumped some 300 tons of mixed chemical waste into the ocean through a sewage drainage pipe connected to its steel mill, according to news reports and the company.

The spill caused tons of fish carcasses to wash ashore on beaches in the central provinces. Tens of thousands of dead fish stretched along 125 miles of coastline in four provinces.

For two months, the government was silent about the cause of the disaster. Peaceful protests followed but the government blocked reporters from investigating it. On June 30, 2016, the government announced that Formosa Plastics was responsible for the massive fish kill.

The chairman of Formosa Plastics admitted the company’s fault in a press conference. The company apologized and promised to pay the government $500 million for the communities most affected by the spill.

Protests resumed, however, over the slow and inadequate payout to the people affected, according to Reuters.

In Oct. 2016, Hoa was the first journalist to use a camera-equipped drone to record what had become one the biggest protests in Vietnam. The drone footage showed protesters gathering outside of the plant and peacefully protesting in front of security guards at the gates.

Throughout months of protests, authorities arrested protesters for gathering and often forcefully broke up demonstrations.

A leader of the Vietnam Forum of Environmental Journalists, Quoc Dzung Hoang, said in an interview with CNS that this was “the first time for my country that an environmental incident caused the resignation and punishment of many high-ranking officials.”

The Formosa investigation led to the resignation of 11 officials.

The steel plant reopened in May after Formosa said it would invest $350 million into improving environmental safety.

News outlets were fined for inaccurate reporting on the situation. “At first a lot of the coverage wrongly reported about the cases,” Hoang, the environmental leader, said.

The online newspaper Bao Moi reported that the Ministry of Information and Communication fined one online newspaper, Dan Viet, $441 for publishing false images connected to the incident. In another case, the Nguoi Dua Tin newspaper was fined for writing an inaccurate headline that said Formosa was transporting waste mud to China instead of “powder.”

“One of the most significant issues (in Vietnam) is the poor quality of journalism,” Hoang said. “They do not know that successful environmental writing is not only about finding the exciting topics like Formosa.”

Prison and a video confession

Hoa was pictured between two security officials as he stood before the court. Only his sister was allowed to attend the trial. In an interview with Chan Troi Moi Media, she repeatedly said she was upset.

Hoa had a chance to meet with his mother and sister before the trail. Hoa told their mother “do not worry about me,” his sister said.

RFA had offered Hoa assistance for a lawyer but he declined.

“We provide assistance through support by way of (press advocacy) organizations,” said RFA spokesman Rohit Mahajan, “in hope that they can provide what’s needed to mitigate or assist a journalist and the family.” He declined to speak about Hoa’s case.

When his sister met with Hoa, she said many policemen were standing around and she did not know what to say. “It is regretful that Hoa did not accept a lawyer in the beginning,” she said.

In April 2017, after four months of detention, the police released a confession video. It showed Hoa expressing regret and asking the government for forgiveness.

“I have a future path because I’m still young,” he said, talking to police officials who said in the video that he had been recruited by foreign media outlets to join their side.

“I was recruited and other people pulled me to their sides and I don’t want to do this anymore,” he said in the video. “My advice to other people…not follow my path in the future.”