She digs into corruption as Ukraine targets possible sources 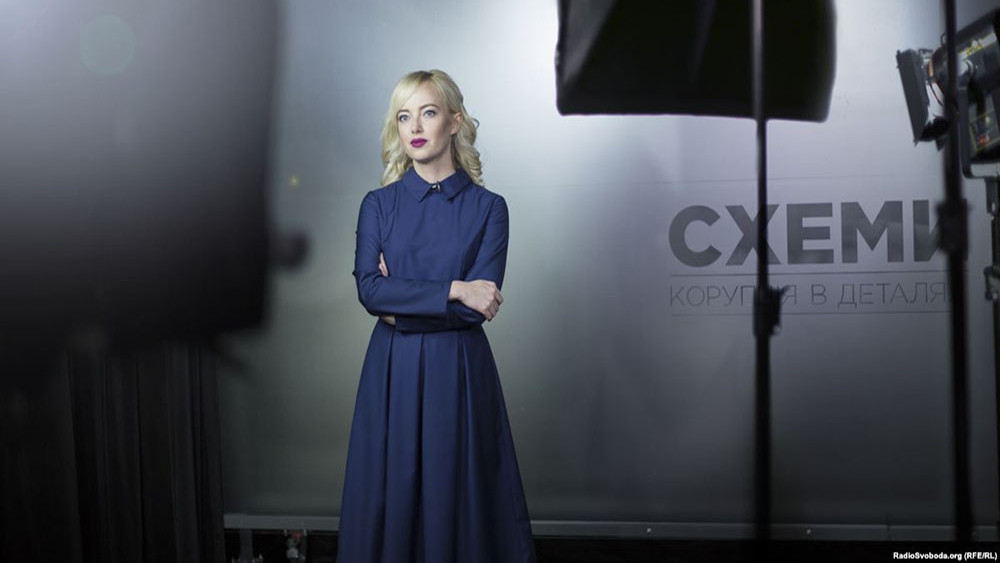 COLLEGE PARK, Maryland – Natalia Sedletska’s award-winning journalism in Ukraine has led to government investigations and prosecutions and become the basis for official efforts to recover millions in taxpayer money stolen by corrupt officials.

Recently she and her colleagues at the U.S.-funded Radio Free Europe have produced dozens of programs investigating wrongdoing in the administration, some of it reaching as high as former President Petro Poroshenko, a U.S. ally who lost his re-election bid in April.

Her stories have made her famous, but they have also attracted death threats and social media campaigns by trolls, bots and paid bloggers to pressure her off the airwaves. More recently, the government has taken legal moves that experts say are meant to intimidate her sources and impede her work.

In an unprecedented move, the prosecutor general in August attempted to seize 17 months of Sedletska’s cell phone records he said he needed to pursue a leak investigation against the director of the government’s anti-corruption bureau. The documents included messages, location information and call logs.

“The decision…created a dangerous precedent that was not yet in place in Ukraine,” she told Capital News Service recently. “It showed that the court can disclose the sources of journalists without…giving (them) the right to appeal, without giving the opportunity to express arguments in the court session.”

The result, she said, is that “sources and whistleblowers” saw that “having trusted contacts with journalists is now dangerous because journalists will not be able to meet their obligations and protect the source.”

The Embassy of Ukraine in Washington and the Office of the Prosecutor General of Ukraine declined to comment. RFE/RL is a U.S.-funded media organization, headquartered in Prague, with a goal of promoting independent journalism in 22 countries, including many former Soviet states with limited independent media. Sedletska’s show, “Schemes: Corruption in Details,” airs on one of the only public channels in Ukraine that is not controlled by oligarchs and politicians.

During the last few years, Sedletska said, Poroshenko had pursued a campaign against investigative journalists and anti-corruption activists as he considers running for a second term.

On the morning of Dec. 19, 2017, Sedletska was summoned for questioning as a possible witness in a criminal investigation against Artem Sytnyk, the director of the National Anti-Corruption Bureau of Ukraine.

They accused Sytnyk of disclosing confidential information to multiple Ukrainian journalists in 2017 about an upcoming case against Konstantin Kulik, the deputy head of the Department of International Cooperation of the Prosecutor General’s Office of Ukraine. Kulik was accused of illicit enrichment by the anti-corruption bureau.

Sedletska is only a witness in the case and is not being prosecuted herself. Nevertheless, many observers believe the prosecutor’s move was intentionally excessive to achieve a chilling effect, which, according to experts, could cause sources to stop helping her.

According to criminal laws in Ukraine, a journalist may not be required to disclose information about sources they had agreed to keep confidential unless a court rules otherwise.

“That the request targets well over a year’s worth of data belonging to a prominent Ukrainian investigative journalist raises deeply troubling questions about the real intent of those seeking the information,” RFE/RL spokeswoman Joanna Levison said in a statement a week after the district court’s ruling.

Poroshenko had established the anti-corruption bureau in 2014 after a popular revolution ousted President Viktor Yanukovych, an ally of Russian President Vladimir Putin, for high-level corruption. At the time, Poroshenko promised to combat the widespread Russian-influenced corruption and to move Ukraine toward establishing European Union membership.

According to Sytnyk, “the pressure on (his office’s) executives and detectives has started with the beginning” of its work, he wrote in an email to Capital News Service. “Despite increasing attempts to influence the activities of the institution and pressure, the…detectives continue to expose corruption schemes and investigate criminal proceedings of top-corrupt officials.”

Melinda Haring, editor of the “Ukraine Alert” blog at the Atlantic Council, said the anti-corruption bureau is the only post-revolution institution that works, and that there’s tension between it and the prosecutor general’s office.

The bureau has successfully put together many cases against government officials, but most are stalled in the court system because corruption is still rampant in the legal system. There are currently 730 investigations and 276 people have been accused of wrongdoing. Only 23 have been convicted, according to the bureau’s website.

Sedletska began her high-profile reporting career with RFE/RL in 2013. A year later, she was among a team of journalists who went to Yanukovych’s estate, Mezhyhirya, to retrieve thousands of pages of documents he had dumped into the river next to the property as he fled the country.

Fished out of the water by divers and then painstakingly dried and published by journalists, they form a paper trail to corruption. In 2015, Sedletska helped create a British documentary “From Russia with Cash,” in which she and others went undercover using hidden cameras to investigate how money laundering of foreigners fueled London’s property boom. The work led to official efforts by Britain’s prime minister to combat the issue.

She is now the chief editor, senior investigator and host of “Schemes: Corruption in Details.” During the 17-month period that officials were seeking to access her records, “Schemes” broadcasted approximately 55 TV programs. Among them were investigations that concerned high-ranking officials.

Many of her recent investigations have exposed the current prosecutor general, Yuriy Lutsenko. These include how his and other officials’ motorcades violate traffic laws; his lavish winter vacation costing an estimated 50,000 Euros; his son’s wedding, which was attended by much of the ruling class.

“Schemes” journalists have been threatened and harassed by the government, according to RFE/RL. The reporters found the cases are either poorly investigated by the same prosecutor’s office or not investigated at all.

Sedletska’s team filed a complaint with the police but it was closed shortly after. Over the course of two years, the editorial staff renewed the investigation through the court three times, but only managed to obtain administrative punishment for one of the offenders.

The European Court of Human Rights — known as the ECHR and comprising the 47 members of the Council of Europe, including Ukraine — primarily enforces rulings through political pressure. On Nov. 23, it held a forum in Kiev, “Supporting Ukraine in the execution of judgments of the European Court of Human Rights.” The forum drew attention to the chronic problem of Ukraine’s judicial system not enforcing ECHR judgments.

Sedletska fought back against the probe into her phone records by filing a complaint in September with the ECHR, which quickly made an interim ruling stating that the Ukrainian government should hold off accessing her records for a month. In October, it decided to maintain the measure “until further notice”.

Ukraine has abided by the ECHR rulings, which had been in line with Poroshenko’s stance of reforming corruption and joining the European Union. The EU has warned Ukraine that the district ruling against Sedletska would endanger its fight against corruption.

Ukraine is also now looking to strengthen its alliance with the United States and the European Union as tensions with Russia rise after Russian naval ships opened fire and seized Ukrainian naval ships near Crimea in late November.

The U.S. ambassador to Ukraine, Marie Yovanovitch, met with Sedletska in September, and called for the need to support a free press.

“We decided it is so important to fight back and protect our rights,” she said. “This negative precedent eventually should have a positive result for the profession.”