Egypt’s Hesham Gaafar from Prison: “They torture me by letting me suffer from diseases” 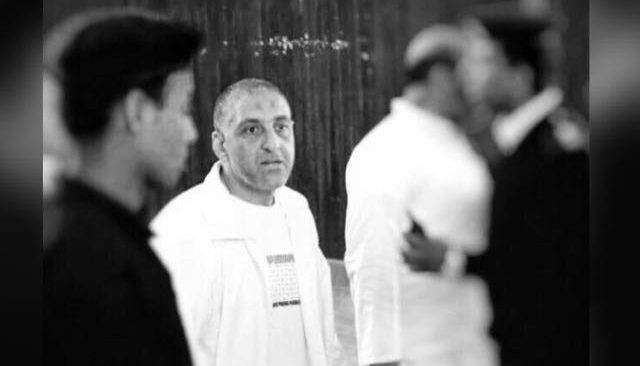 A pounding on the door cut through Loay Hesham’s Wednesday afternoon at his home in Cairo.

National security agents were at his doorstep. They swarmed inside, tore the house apart and fired a barrage of questions at the 22-year old journalist about his political beliefs.

But he sensed he wasn’t their target. “I knew they were not coming for me because, if they were coming for me, they would not [have talked] to me. They would just take me out of the house,” Loay said in one of dozens of interviews recently with Capital News Service.

His mind snapped to his father, Hesham Gaafar, who was working next door at the Mada Foundation for Media Development, a Cairo non-profit group he had founded to train journalists.

As soon as the agents left, Loay rushed over to find dozens of officers and police cars surrounding the building. After two attempts to break through them, Loay was allowed a quick look at his father who was sitting in a chair surrounded by five officers.

“They asked me to get out but I refused so they started kicking and punching me, then they took me to the house again,” Loay said of the October 21, 2015 incident.

As Loay was being dragged away because he refused to leave, his father was put in handcuffs and forced into a car.

It was about 1 p.m. They kept the 51-year-old journalist in the car for 17 hours, until 6 a.m. the next morning, according to Loay. Then they drove off.

Two days later Loay and his family learned that Gaafar was being detained at the national security headquarters in Cairo.

Gaafar was charged with accepting bribes and being a member of the popular religious and political group, the Muslim Brotherhood, which the government has labeled a terrorist organization, according to Karim Abdel Rady, his attorney.

Gaafar has said he is innocent of the charges. But for a year and a half he has been awaiting trial in a filthy, bug-infested cell in the infamous Scorpion Prison in Tora, Egypt, according to son and press advocates. His son, who has visited him every chance he is allowed, often weeks apart, said he is suffering from an enlarged prostate and nerve damage in his eye and has been denied proper medical care for both.

“They torture me by letting me suffer from diseases,” Gaafar said in response to questions by CNS taken into the prison.

Multiple emails and phone calls to the Egyptian Embassy in Washington asking for a response to Gaafar’s allegations of mistreatment and unwarranted detainment went unanswered.

Prior to his arrest, Gaafar had a long career as a journalist and mentor who advocated for human rights and independent media.

“I wanted to be a journalist because I think the word has power and free press can achieve democracy,” he said in response to questions.

Those sympathetic to Gaafar say his plight is symbolic of larger press freedom and human rights problems pervasive in Egypt since the coup engineered in 2013 by Abdel Fattah el-Sisi, formerly the head of the armed forces during military rule.

Gaafar “is pushing for ideas, after the massive abuses and violations to human rights, ideas to … move beyond this bloody chapter in Egyptian history,” said Amr Hamzawy, an exiled former Egyptian parliament member and senior fellow at the Carnegie Endowment for International Peace.

The bloody chapter Hamzawy is referring to is the period of relentless political unrest and presidential upheaval that began in Egypt in 2010 as part of a wave of revolutions, known as the Arab Spring, that spread through the Middle East. The Muslim Brotherhood, a popular but banned, underground movement, sought representational government and helped force President Hosni Mubarak from the position he had held for 30 years.

Mohammed Morsi, a presidential candidate backed by the Brotherhood, was elected in 2012 following the country’s first competitive democratic election. Morsi created a fresh constitution that instituted a role for the Islamic religion. But he eventually cracked down on dissent which sparked violent protests and allowed for the rise of al-Sisi.

After his ouster, the government declared the Muslim Brotherhood a terrorist group. The next year al-Sisi won a controversial presidential election with over 90% of the vote.

In 2015, the Egyptian government passed a counter-terrorism law that allowed for the detainment of those suspected of opposition party membership.

This counter-terrorism law has allowed for greater governmental control over opposition parties and expression of dissent, including over the media that reports on it, according to Mohamed ‘Arafa, an adjunct professor of Islamic law at Indiana University.

“We have provisions in the penal code talking about if you insult or criticize the current government or political system,” ‘Arafa said.

According to ‘Arafa, the law has allowed the government to close down most non-governmental organizations and to vastly curtail the type of information the media is allowed to publish and broadcast.

Many professionals and public figures familiar with Gaafar’s case assert that he has had no affiliation with the Muslim Brotherhood.

Gaafar’s lawyer said he, in fact, has had well-known ideological disagreements with the Brotherhood and has published his views in various media outlets.

Gaafar received his Masters degree in political science from Cairo University. After graduation he worked as a researcher for various organizations until he began his journalism career at Islam Online in 1999.

One of Gaafar’s first ethical challenges came when he was the editor-in-chief there. The website’s owners attempted to tamper with the editorial policy and impede Gaafar’s colleagues’ rights to publish what they wanted to write, according to human rights lawyer and activist Gamal Eid, a 10-year friend of Gaafar.

“He confronted them and took the side of freedom of the press and that of his colleagues [even though],” Eid said in an interview with CNS.

Gaafar moved from Islam Online to the Mada Foundation for Media Development in 2010, a non-profit foundation that funds research projects and trains local journalists.

“His work was building peace and managing dialogues between many parties in Egypt,” Loay said.

Loay said the government became concerned because the foundation was independent and trained young journalists to value press freedom, as Gaafar believed.

The foundation was shut down following the raid in 2015. Over 30 employees were left jobless, and many were targeted for investigation. All training courses and events were abolished and all its funds were seized.

It was a jarring turn of events for the soft-spoken, now 52-year-old.

Those who know Gaafar describe him as a man of integrity.

“He is aware of his role as an intellectual trying to serve other people and society,” Eid said.

Amr Hamzawy, the exiled former Egyptian parliament member and current senior fellow at the Carnegie, said ”He is someone that, through whatever function, tries to push for what he believes in a non-violent, in a peace loving, in an Egypt loving, always Egypt loving, way.”

Hamzawy said he has never been affiliated with a political group or movement. “He is one of those who defended the rights of the Egyptians to find a way out of the current tyranny, and for that he is being pursued,” he said.

Since his detainment, his son said Gaahar has been transferred from the Tora supermax facility, also known as “Scorpion Prison,” which is reserved for the most dangerous threats to national security, to the Tora Prison hospital and back again.

Gaafar’s ailments, an enlarged prostate and nerve damage in his eye, forced him into the prison hospital in February 2016 but he was still refused medical treatment. Loay and his family were responsible for bringing him medicine.

“The place we sat in together was very disgusting; there were no clean places,” Loay said.

Since Gaafar was transferred back to Scorpion prison in March 2017, the family goes weeks without seeing him.

When Loay was finally allowed to visit Gaafar two and a half weeks after his transfer, Gaafar said he was suffering greatly and wanted to go back to the hospital. Loay said it was the first time he’s seen his father truly angry.

“He said that there is not enough food and the bugs are everywhere, the cell is very dirty and that causes many diseases besides what he has,” Loay said.

A photo of Loay in the hospital shows him as thin, weathered and slouched over.

According to Gaafar’s lawyer, there is little hope for a quick trial or release.

Authorities have spent two years investigating his case and no official case documents have been filed, according to Rady, his attorney. Lengthy pre-trail detainment is a common tactic in Egypt’s justice system.

Yehia Ghanem, a former Egyptian journalist who went into exile in 2013 after being convicted of trumped up charges, described freedom of the press in Egypt as “black and bleak.”

In 2011 Ghanem was arrested on charges of receiving millions of dollars for a US-funded non-profit organization, the International Center for Journalists. Ghanem and the U.S. government maintained his innocence but after a two-year trial, Ghanem and others were convicted of all charges and was forced to live abroad to avoid prison.

As a major military power and U.S. ally in the fight against terrorism, free press and human rights violations are not a priority for allies like the United States, according to Mohamed ‘Arafa, the professor of Islamic law, especially with the current administration.

“The administration [in America] doesn’t care about the human rights profile, not only in Egypt but for the Middle Eastern countries,” ‘Arafa said.

Still, Gaafar said he has not given up hope.

“This job is very exhausting and difficult so any journalist must believe in it,” Gaafar said,

“They must make their words free to keep their countries free.”